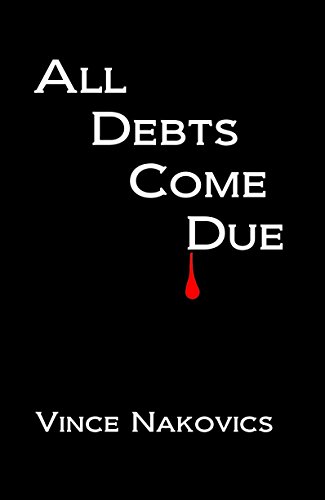 BUY ALL DEBTS COME DUE

ALL DEBTS COME DUE

Derrick Garraghan, should have seen it developing, the nephew’s jealousies. Before he realized it he was being buried alive in a shipping container. Brought to the brink of despair, he found his prayers answered, but at what cost? Derrick knows, this debt is no different, all debts come due.
The old stories haunted Vladimir his whole life. The stories and his looks made his life miserable, but he changed all that. It is he who makes people’s lives miserable now. It was difficult, but he tracked down all the scientists descendants. He sets about to make their worst fears materialize, worse than the ones inflicted on his ancestors. He has a special surprise in store for them.
Katherine Culver’s instincts led her to Weaverville in pursuit of a serial killer. She discovers Derrick hiding out here, is drawn to him and quickly develops a bond with him. She has doubts; she worries Derrick may be the killer and leading her on. It isn’t until she casts those doubts aside does she come to understand Vladimir will outsmart the police and Derrick’s talents are needed to put an end to the killings.